A Rare Breed of Asian Origin 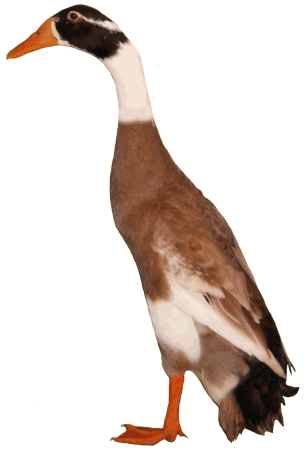 The Indian Runner is a light breed that was developed exclusively as an egg-producer. In its heyday the Indian Runner was the ultimate egg machine, with laying records that greatly exceeded those of any hen. In 1921 an Indian Runner is said to have laid 363 eggs in twelve months at Papanui in Christchurch.

The Runner originated in Asia and was introduced to Britain in the 1870s. It is a slim, upright, active duck with relatively long legs, enabling it to walk or run without the roll or waddle of most ducks. Fanciers have tended to breed to exaggerate this stance and have been accused of aiming for “Too much Runner and not enough Duck!”

They are very eye catching and unusual. Their stance is upright and a whole team of Indian Runners rushing along a path is quite a sight.